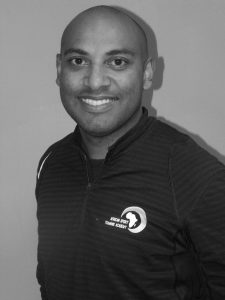 Ricardo is a 36 year old entrepreneur who is passionate about sport development. He grew up in Grassy Park and is an alma mater of South Peninsula High School, where he excelled in athletics and represented the school in both the 100m and 200m events. While also being a provincial soccer player, his sporting career really took off as a baseball player, representing Athlone A’s as an infielder. At the age of 21, Ricardo represented the national team and continued to for several years. The highlight of his career being the 2006 World Baseball Classic in which he lined up opposite his idol, New York Yankees Shortstop Derek Jeter.

Graduating with a Degree from University of the Western Cape in Biokineticist and Sport & Exercise Science, Ricardo achieved great success working at Sports Science Institute of South Africa (SSISA) as a Biokineticist and Athlete Mentor in the Macsteel Maestros Programme, which supports the development of athletes through various initiatives. He spent 10 years at the Sports Science Institute of South Africa (SSISA) developing and managing some of South Africa’s top athletes, including some of South Africa’s Paralympic and Olympic athletes. Furthermore, he pursued an Associate in Management qualification from University of Cape Town’s Graduate School of Business. Being an entrepreneur, Ricardo set up a Biokinetics practice in his name, while working at SSISA.
With community and sport development at heart, Ricardo setup the NPO Athlete Support Development and Management (ASDM) in the Athlone area with the goal of servicing the community in health, wellness, and sport.

In 2016, having spent the better part of 10 years servicing athletes at the SSISA, this was the right time for Ricardo to open up African Sport Training Academy (ASTA) with a vision in mind of ASTA being a centre of excellence that produces world class outcomes in sport performance, athlete development and health & wellness. The Academy is based in Vangate Sports complex, which is the home of the Athlone A’s baseball team and is fully equipped with a functional gym. Since opening in July 2016, the academy has grown and currently services several provincial and national athletes including the Western Province Practical Shooting team. ASTA not only focuses on Sports Development, it offers services in education and training having already successfully run several courses in the past with both athletes and coaches. He is currently the founder and managing director of the African Sport Training Academy (ASTA) which focuses on athlete and sport development.

In the future, Ricardo envisions an environment which allows athletes to follow a dual career path which means that while they are focused on achieving excellence in their sporting code, they are also looking towards life after sport through various courses and customised academic learning programmes.